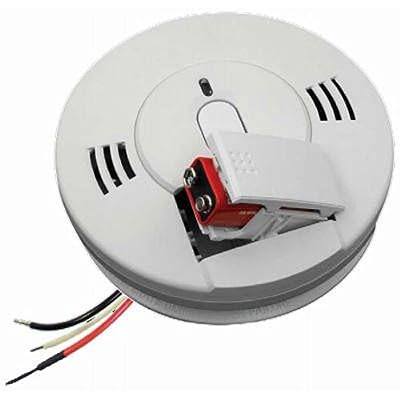 Provides protection from fire and carbon monoxide in one unit with Photoelectric sensor. Fire Warning - The red LED will flash and be accompanied by three long alarm beeps followed by a verbal warning message "FIRE! FIRE!". The alarm will repeat pattern until unit is reset or smoke is eliminated. Carbon Monoxide Warning - Four short alarm beeps followed by a verbal warning "WARNING! CARBON MONOXIDE!" This continues until the unit is reset or the CO is eliminated. Low Battery Warning - One chirp followed by warning "LOW BATTERY". The red LED light will flash. This pattern will continue every minute for the first hour. After the first hour the red LED light will flash once every minute accompanied by the chirp sound. The "LOW BATTERY" warning will only sound once every fifteen minutes. Voice Hush Indication: "HUSH ACTIVATED" and "HUSH CANCELLED" voice announcement Alarm Memory - The green LED will blink once every 16 seconds to alert a user when the unit has alarmed for smoke or has detected a concentration of CO. If the alarm has detected a CO level of 100ppm or greater, when the Test/Reset button is pressed the unit will announce "CO PREVIOUSLY DETECTED". If the alarm has detected abnormal levels of smoke since its last test, it will produce three rapid beeps. AC-Wire with battery backup, An included 9V battery protects during short-term power outages Front-loading battery with unique battery door design Voice Warning with Green and Red LEDs Photoelectric smoke sensor - May detect visible fire particles associated with slow smoldering fires sooner than an ionization sensor. Tamper resistant